Teesside will travel to Manchester Swarm on Sunday 23rd October for the third-round fixture of the National Cup following the weekend victory over Sheffield at Eston Arena.

Lions entered the game without captain Theo Turner and Eddie Matthew who were both ill. Returning was player/coach Oliver Hylands and Billy Cousins and they made an immediate impact as they combined for 40pts in a game that was a little too close for comfort in the final quarter.

Sheffield were humbled in the early stages as Teesside developed an 8-0 lead and looked in complete control at both ends of the court. Declan Kom was contained for vast swathes of the game and Aiden Appleyard was struggling to connect for Sheffield, although this would change later when the experienced shooter caught fire from the second quarter finished the game with 23pts.

In the first quarter in was the dynamic duo of Matt Hughes and Manny Kabengele who wowed the crowd with an array of athletic finishes, often the conclusion of pin-point passing from Luke Mitchell. Kabengele’s awkward reverse lay-up in the seventh minute having no right to go in provided a confidence that things would go Lions way.

By the end of the first period Teesside were in vibrant mood as they led 24-16.

In the second quarter it was one basket better for Teesside as they hit 26pts and limited the visitors to another 16pts. The warning signs, however, were starting to show on defence as Appleyard hit two 3’s. He and Sheu Matewe would finish the half with 11 points apiece after Matewe produced an And 1 finish at the buzzer to take the shine of a good first half for Lions. Lions still in control 50-32 at half time. 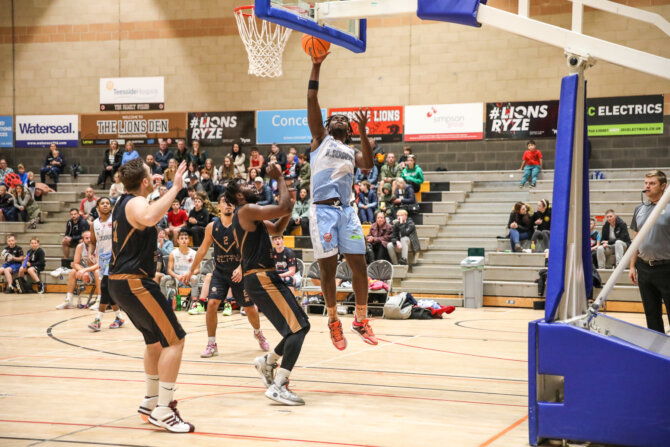 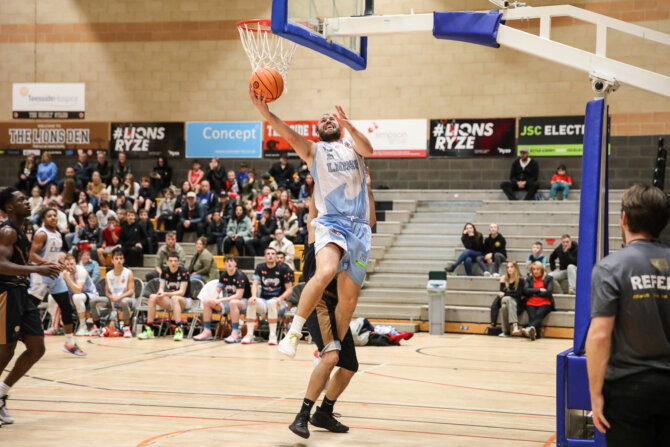 The third quarter was the best defensive period for Lions as they contained Sheffield to just 12pts whilst Billy Cousins showed his athleticism with a flurry of finishes. Complementing that speed in transition were two lovely controlled jump shots from Kabengele. Two 3-pointers from Tom Wylie and Cousins later in the quarter left Coach Scantlebury a difficult task as Teesside were scoring from so many positions and from so many players.

With a 21pt cushion the game should have been ticked, but a disjointed final quarter will serve as a stark reminder that nothing can be taken for granted. Sheffield found life as Holder, Morey and Klivcevicius took advantage of a lapse Teesside. Morey hit two big 3’s to rejuvenate the visitors and with just three minutes remaining Sheffield were within 4pts of the game.

There was a sense of concern as the game drew to a close although the result always seemed destined to be in favour of the hosts.

Oliver Hylands and Matt Hughes balanced the rocking boat in the final period. Hylands converting two And 1 plays while Hughes showed good control on offense with a mixture of scoring and assists.

A 20-26 fourth period made for an exciting finish for the Teesside fans and with the Sheffield fans also in good voice it made for a great atmosphere. 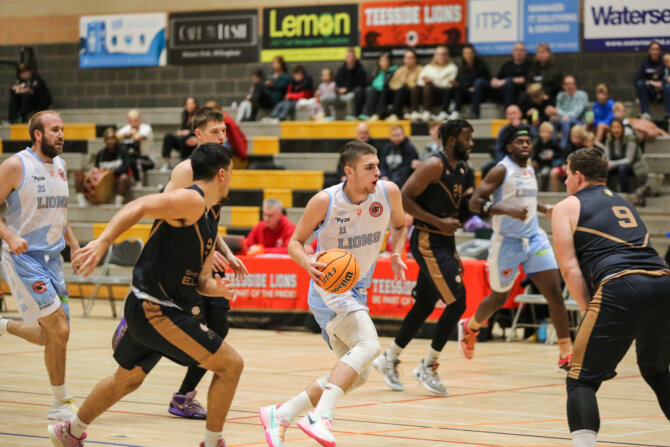 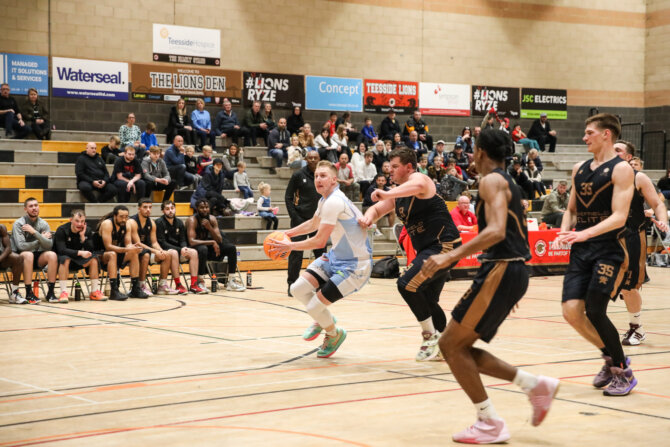 The energy was really positive, and it gave us a big boost.
Billy Cousins

Billy Cousins marked his competitive debut with a superb performance and was happy with the overall result, stating:

“We worked hard and it was great to be playing in front of the Lions fans. The energy was really positive, and it gave us a big boost. Despite the poor final quarter, we showed good character under that pressure and that will only hold us in good stead for future games.

“We did the job on the day and look forward to the Manchester game in a couple of weeks.”

Teesside will travel to Sheffield on Saturday for the league fixture against the same opposition in the raucous Sheffield City College, where their crowd will afford the hosts an advantage, and Teesside will have to ensure there are no room for errors for the full four quarters.

Lions will then travel to Manchester for round three of the National Cup before returning home to play Sheffield Elite II at Eston Arena on Sunday 30th October. Tickets are available now at TeessideLions.com 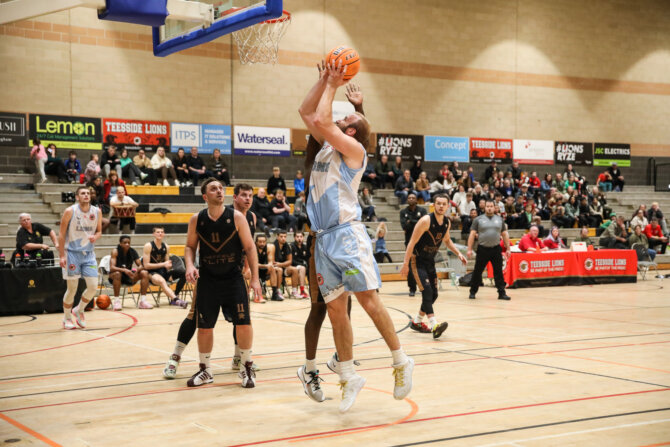 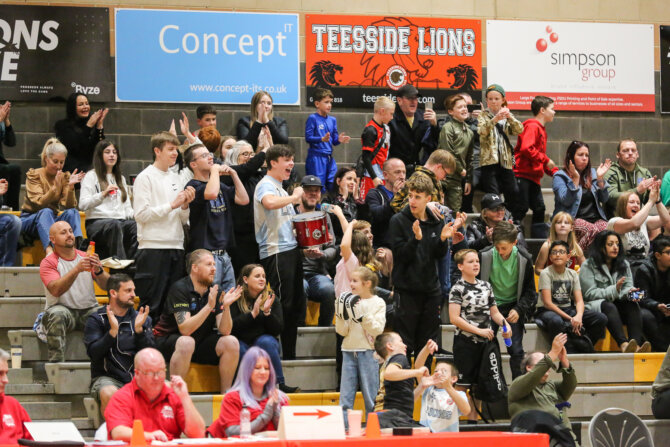 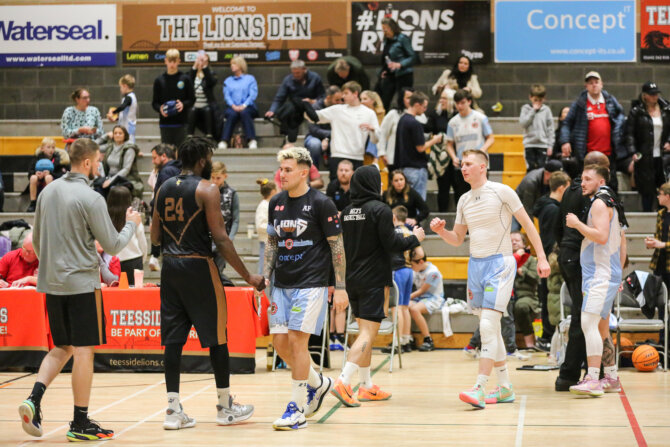 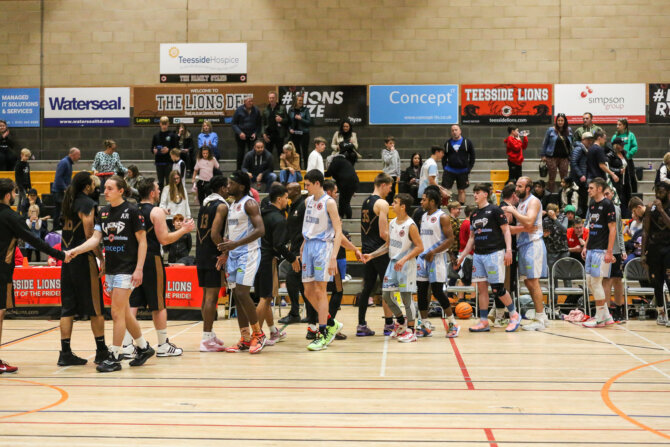 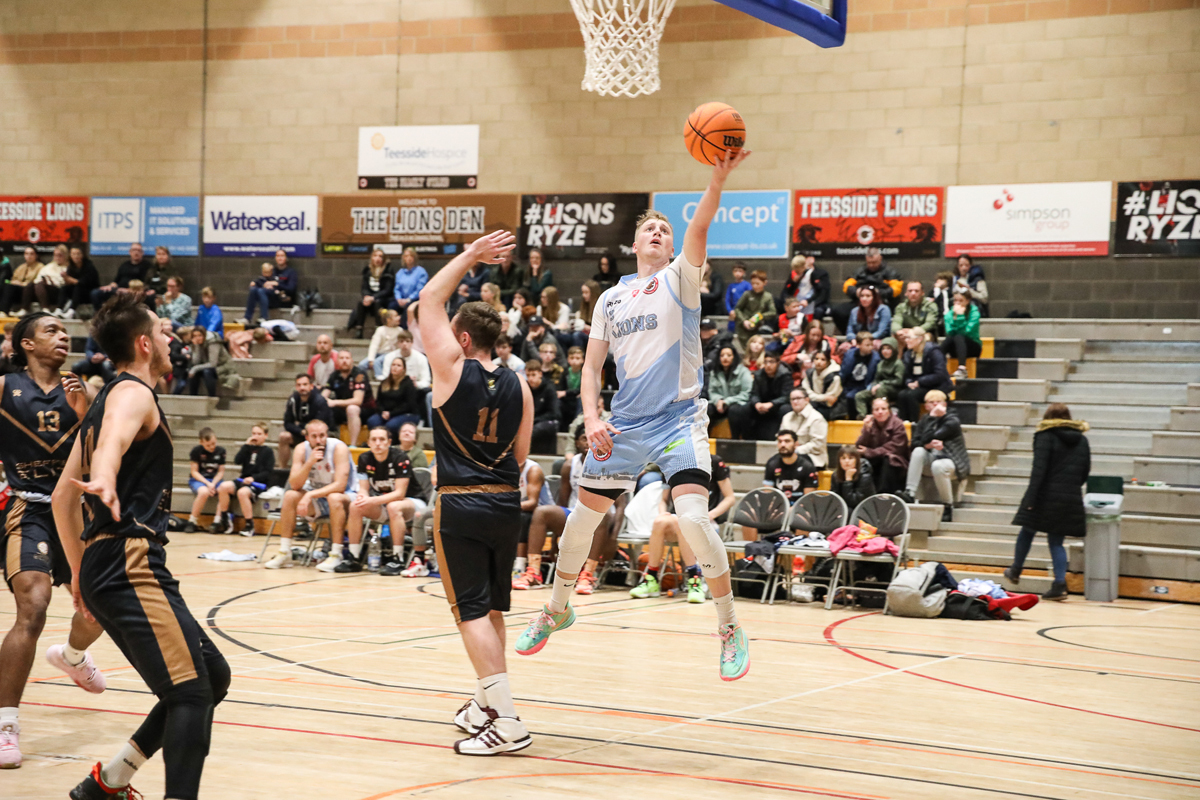