Turner & Mitchell put on a show in Manchester

Theo Turner led scorers and rebounders with 22 apiece for Teesside Lions as they overcame Manchester Swarm to progress into the fourth round of the National Cup.

Another key figure and player of the game Luke Mitchell had one of his best games of the season with 19pts & 8 assists including an impressive number of highlights.

The game began in thrilling fashion for Lions as Manny Kabengele hit a jump shot off the dribble followed by a big 3-pointer from Eddie Matthew. Lions early lead was then stretched out as the home team struggled to respond to the early Teesside dominance.

A 3-pointer from Joseph Swindells and a lay up from Louis Weaver would be the only points Manchester managed for the majority of the first half. A flurry of 8pts toward the end would bring them back into the game, but following a late jab step and pull back 3-pointer from Tom Wylie left not only his defender shaken, but also the Manchester team.

Teesside continued in much the same vein as they extended their 10pt lead into 17pts by half time. Teesside were moving well in transition and the ball movement in half court was excellent at times, showing how well the team chemistry is developing. Billy Cousins was electric at the mid-point with an 8pt run, an assist from Mitchell providing an entertaining dunk as Teesside continued to enjoy their return to the NBPC.

Louis Weaver was warming up with 10pts in this quarter but Teesside were still in control 31-48.

After half time a slow start bruised Lions ego as they struggled to score and Manchester found some confidence with a 7-0 run. Jayden Johnson found his rhythm in the second half but while attention was focussed on the identified threats of Swindells and Weaver; Swarm found a new hero in Elgin Govan. The 6’0 guard hit 16pts in the second half and while the game was a little closer than Teesside would have liked, they maintained a 10pt cushion through the majority of the game and closed out an important victory.

Teesside relied on the experience of Siman Stewart in the second half as he calmed down affairs and ensured a better control of tempo.

Teesside Lions Coach James Thomson was pleased to see the team through to the fourth round adding:

I thought the first half was some of the best basketball we have played. Luke was instrumental, but everyone was playing well.
James Thomson | Teesside Lions Coach

“The second half was a much bigger challenge, and credit to Manchester for bringing the game to us after a difficult start for them. While we struggled to adapt initially, the test was a useful one and we showed good resilience and work ethic to grind out the win on the back of a 10pt cushion.”

Teesside will host Myerscough in the fourth round of the National Cup on Sunday 13th November. Prior to this the Lions will be back in league action this Sunday at Eston Arena where the team welcome Sheffield Elite’s second team.

Tickets are available via TeessideLions.com 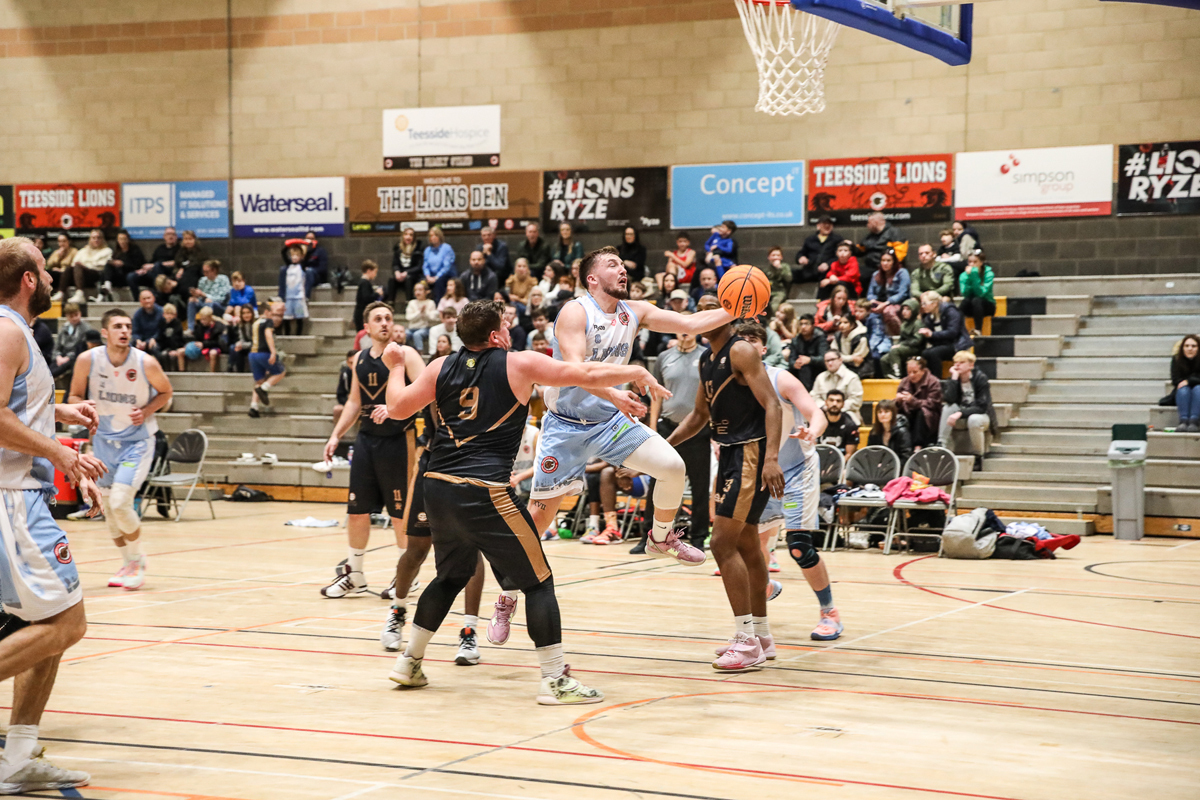